Democrats Are Not in Disarray

Democrats Are Not in Disarray 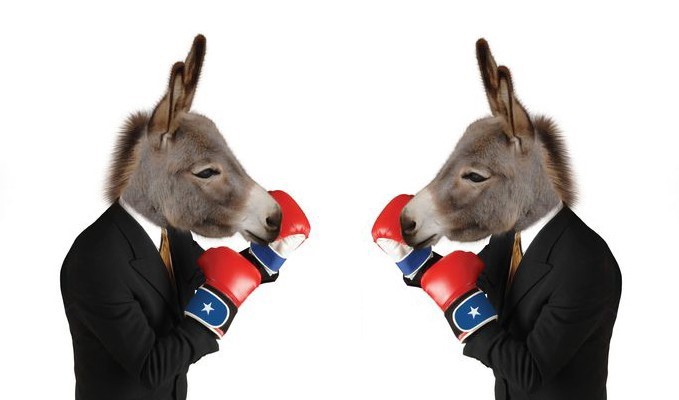 The increasingly crowded presidential field is something that Democrats should embrace. We should be celebrating the fact that our party is producing a field of quality candidates, all of which would be a better president than the current occupant of 1600 Pennsylvania Avenue. We have an increasingly diverse cohort that occupies every inch of the political left spectrum, and for that, we will ultimately become a much better party contending to compete against a Grand Old Party in 2020. The GOP is a party that sold its soul to Donald J. Trump and Trumpism, for which we all know they will soon regret. We should not get distracted by the political collective that thrives on perpetuating outrange and dysfunction. Democrats are not in disarray.

Democrats should embrace our field of candidates and prepare to do the hard work of citizenship. We need to listen closely to the candidates, evaluate their ideas, and generally take the time to listen with open hearts and minds. We should ask our candidates hard questions and thoroughly vet their ideas, policies, agendas, and personalities. We should also take some time to evaluate our ideas and values sensibilities. I urge caution as we move closer to campaign season. We should not jump into our ideological camps too early. Doing so will only close us off to different perspectives and ultimately make us less susceptible to persuasion and debate. Democrats are not in disarray.

I urge my fellow liberals to take a moment and examine the progressive agendas of a Bernie Sanders, Andrew Gillum, Elizabeth Warren, Beto O’Rourke, or Kamala Harris. I urge my progressive contemporaries to take a moment to think about the pathways presented by more established leaders like Joe Biden, John Hickenlooper, and Jay Inslee. I urge my fellow Democrats to examine Senators Gillibrand, Booker, and Klobuchar. We should explore the lesser-known candidates like Millennial Mayor of South Bend, Pete Buttigieg or Julian Castro, or Stacey Abrams. We should take a moment to review the campaign agendas of John Delaney, Tulsi Gabbard, and Andrew Yang because they are also making valuable contributions to the debate. We should lean into all of the Democratic candidates who are putting their names and visions for the country forward because Democrats are not in disarray.

The schisms in the Democratic Coalition are overblown, and the overstated claims of party infighting are distractions. Further, the party is not moving to some radical far-left ideological position. The coalition, from the Socialist-Democrats, Progressives, Liberals, center-left moderates, and red-state Democrats all share fundamental values and are generally in alignment. We shouldn’t let the talking-head collective try and tell us otherwise.

What the Washington echo-chamber fails to recognize that at the end of the day, all politics is local. County Democratic Parties, activist organizations, and an increasingly diverse group of candidates are making the case to groups large and small at the local level. Democratic Clubs and left-leaning political organizations are knocking doors, building community relationships, and organizing block by block. These groups are speaking about the issues closest to home. These groups understand the real issues at play and generally know better how to win elections in their communities better than Washington influencer and flashy campaign consultants. Focusing on grassroots activism and mobilization is how we will be successful in 2020. Democrats are in not in disarray.

We should not forget that we mostly agree on the issues and share common values. Socialist Democrats, Progressives, Liberals, and those on the center-left all share common values. I believe that is fair to say that if asked, most if not a super-majority of folks on the political-left broadly accept the values presented in the Democratic Party’s Platform.

We all recognize the need to fight for healthcare, economic security, environmental justice, fairness, equity, and equality, the existential threat of climate change, defending our democracy, combating the epidemics of gun violence and the opioid crisis, and restoring a sense of normalcy and decency to the republic. We should not lose sight of those values. We should not let the talking heads con us to believing that we are some dysfunctional mess. Democrats are not in disarray.

The next 18 months are going to be long, particularly, in this current era where news cycles blend and social media never ends. We should remain focused on what is important. Every single declared Democratic Presidential candidate is better than Donald Trump. We should engage in this process with an openness. We must always strive to practice persuasion, which is hard. I believe that if we like a particular candidate or campaign, we should support them and work to persuade others to our perspective. I suspect all of the candidates I mentioned would be glad to have our support, be it time, talents, or treasures.

I say, let’s all be for the candidates of our choice and open to learning about others. It is easier to be for someone than proclaiming why you are against someone. Let’s all decided today, that the claims from the political collective are wrong. Democrats are not in disarray because Democrats have their eyes on the prize of a restored democracy and government that works for all us in pursuit of life, liberty, and happiness.