A Tale of Three Candidates

A Tale of Three Candidates 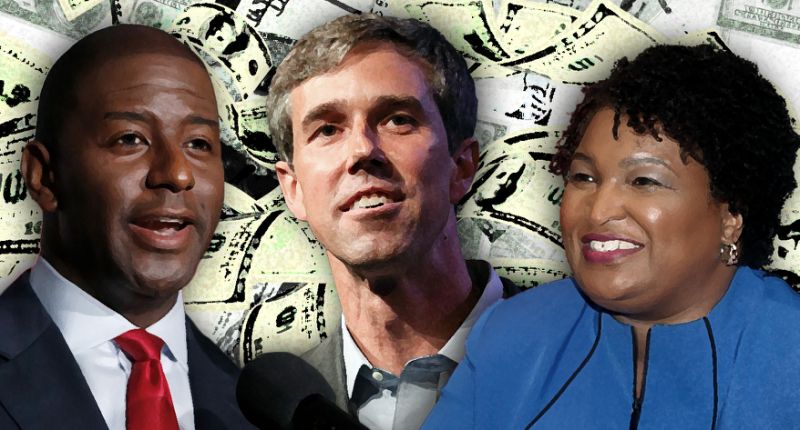 In the fall of 2018, millions of Americans-weary from the overwhelming toxicity of an inept and comical Trump presidency-turned their eyes to a trio of young and diverse candidates who many hoped would be harbingers of the Blue Wave. Ushering in a reformed and invigorated Democratic Party. Stacey Abrams was an African American woman running for Governor of Georgia. Andrew Gillum was hoping to become the first African American Governor of Florida. Francis “Beto” O’Rourke was a charismatic GenX’er running to unseat one of the most unpopular politicians in the country: Ted Cruz. For all the lofty dreams and high hopes, their respective rides on the Blue Wave all ended in the same way: in defeat.

Stacey Abrams lost a close election against Brian Kemp-who in acting as Georgia’s Secretary of State-refused to acknowledge the outrageous conflict of interest of overseeing an election he was competing. Kemp went on to abuse that power through widespread voter suppression tactics, specifically aimed at disenfranchising black voters. In the aftermath of the election, Stacey Abrams got to work. She identified the issue, dug her heels in, and devoted her time and resources to creating Fair Fight Action, an organization dedicated to ensuring fair and free elections in Georgia.

Andrew Gillum followed suit. Like Abrams, his campaign had a national spotlight, attracting high profile endorsements from big names like Bernie Sanders and Hillary Clinton and ended in a tight loss. Gillum would lose by a mere .4% to Ron DeSantis. However, the most impactful similarity between the two is in Gillum’s response to his defeat. Following Abrams lead, he has eschewed jumping into the crowded 2020 field, instead of committing himself to lift his home state of Florida by launching Florida Forward, a massive voter registration push dedicated to building up a grassroots infrastructure of activist and organizers.

Beto O’Rourke ran the most high-profile campaign among the three in his battle against the grossly unpopular, bag of goo known as Senator Ted Cruz. Beto energized crowds and invigorated Democrats from almost every walk of life. In many ways, he was the face of the Blue Wave. He lost the war but was able to win some battles. Through the massive turnout, he accrued, a whole bunch of left-leaning state house reps and judges to be elected. That achievement was a much-needed breakthrough for a Democratic Party that badly needed stronger state parties and a deeper back bench of candidates. He created real change in a way unseen in Texas for a generation. In a state ravaged for decades by far-right politics and on the verge of demographic change, Texas Democrats and more importantly- marginalized Texan communities looked to Beto as a figure who could lead them into a new era.

But here is where the similarities between the three ends.

Andrew Gillum and Stacey Abrams have eschewed personal ambitions and glory-seeking in favor of doing what best helps the Democratic Party win in 2020. They’ve embraced an activist’s mindset and have dedicated themselves to the hard and unsung work required to build lasting change in their state. In the words of Andrew Gillum, “we’re used to working.” Beto O’Rourke has done the opposite. In choosing to run for president, he’s turned his back on the progress made in Texas and is indulging a personal vanity project fueled, not by policy or experience, but by his brand.

My antipathy to Beto’s campaign isn’t because of a personal dislike of his character; I think he’s a pretty nice guy. It’s because of the indelible imprint of the privilege of his media and celebrity-driven campaign-and if we as a party are serious about things like diversity, intersectionality and increased representation-we have to ask ourselves why Beto appeals to so many of us.

Winning in 2020 won’t be easy. Anyone who discounts Trump and his appeal is a very silly person, and you should not take their opinion seriously. We have to fully mobilize on every level and begin to build real grassroots infrastructure that will help Democrats overcome voter apathy and institutional barriers like voter suppression and gerrymandering. If we can accomplish this, then we will have a path to not only taking back the presidency and the Senate but also flipping governors, state houses,  and local municipalities. Beto leaving Texas is a wholesale abandonment of this strategy. Abrams and Gillum on the hand have bought in completely. Their mission is directive driven. Beto’s is personality driven. They want to build the health of their state democracy for not only 2020, but decades beyond that.

Beto is running for president because-as he stated in true celebrity fashion on the cover of Vanity Fair- “he was born for it.” Stacey Abrams put Georgia first. Andrew Gillum put Florida first. Texas should not have to take a back seat to Beto’s ambitions. But that’s where we’re at, and we have to ask ourselves why he’s getting a free pass when by all objective measures Gillum and Abrams would be called selfish and egotistical if they made this same move. As Stacey Abrams recently said “There is no distinction with a difference between what Beto has accomplished and what Andrew and I accomplished. I would challenge people to consider why we were not lifted in the same way. I think race plays a part. I think region plays a part. I think phenotype plays a part”.

So why haven’t they been lifted as Beto has? During his Senate run, HBO gifted him with a documentary, Pod Save America has financial stakes in his campaign and as mentioned earlier-Vanity Fair graced him with a cover issue to commigrate his presidential announcement. If you want to argue it’s because of some innovative and ground-breaking policy platform he has, let me dispel that fantasy for you right now. If you care about policy, Beto is as bland as they come. In the past he’s been funded with big money from the fossil fuel industry, has gone more conservative on healthcare than the majority of the Democrats running and is lukewarm on an assault weapons ban.

So, in the age of mass shootings, why tell crowds “that you can keep your AR-15’s” as he has? At a time when families end masse are going bankrupt because of medical bills and GoFundMe is the nation’s second largest healthcare provider, what’s to like about Beto being more of a conservative on healthcare than the vast majority of Democratic candidates? And if you believe in the climate science that has us mere decades away from irreversible ecological change, why should I support Beto after I realize how gas and oil companies have funded his campaigns in the past?

To lay out just how unnecessary his campaign is, let’s sketch out Beto’s place in this field of candidates:

So where does Beto fit in? What does he have that no one else has? Beto is a white former congressman who lost his Senate bid, isn’t running on any notable policy platform and is content with letting his personality be his defining feature. If we follow Republicans and support a candidate because of their celebrity, we will reveal all talk about diversity and representation as totally disingenuous. We’ll be cementing a double standard for generations. Multiple women, people of color and populist candidates were passed over in favor of Beto O’Rourke, whose the main appeal is that he was the cool guy who almost beat the weirdo Ted Cruz and is a tall and a relatively handsome guy. And that’s it. But if you’re content with it, and you care about finding a new JFK or a white Obama (as some donors have reportedly said) then so be it. But don’t be surprised if we lose in 2020.

And I say this because we’re losing sight of the fact that Beto has style and no substance, he has no message which appeals to the material uplifting of the middle and working classes, and a candidate without that message will lose. Yes, much of Obama’s popularity came from his rhetorical skill and magnetic personality, however, it’s not only laughable to compare the two, but it demeans Obama. The former commander in chief ran in the 2008 primary, he ran with a very populist economic message and spoke directly to the material needs of the people in front of him. Farmers in Iowa didn’t vote for Obama because he was smooth and made them laugh. That’s a fairytale. They voted for him because they believed he would represent their needs better than McCain. And that’s why so many Obama voters ended up voting Trump. Losing sight of this fundamental truth is a mistake that Democrats can’t afford to make again. The situation is so dire, the need for change is too great; the health and wellbeing of too many hang in the balance.

David Petrantoni is Vice President of the Pinellas County Young Democrats, a proud Sponger and a voracious Chicken Parm Lover. David is also currently serving as Precinct Committeeman with the Pinellas Democratic Party.